Weekend Full of Memories in Virginia.

Mike came home last month with news he had gotten four tickets to the BYU/Virgnia game.  I was thrilled.  We loaded up the two oldest this past weekend, and headed to beautiful Charlottesville, Virginia.  It was  a weekend adventure with a football game in the plans.  We just took our oldest Alyssa and Mikey.
One of my close friends watched the babies for me, so I knew the "little's" were in good hands.

Mike got the tickets for the game, and I was in charge of finding a place to stay for just one night.  Of course I wait till about 48 hours before the trip to find such a place.  I am SUCH a bad procrastinator.  All people I admire and love seem so organized, and highly motivated in the planning area.  I am probably one of the worlds best procrastinators.  I say "best" just to make me feel good.

Anyways....I struggled to find a hotel for a good price.  I decided to take another course of action, scouring the Internet for a bed and breakfast NEAR Charlottesville.  I was feeling a bit adventurous.
After calling about ten I finally found one bed and breakfast that not only had ONE opening, but also took kids. Apparantly bed and breakfast's don't cater to families.:)
Without further adieu and discussion with my travel partners I booked the room for the night.

We packed up late because Mike got stuck at work and headed out for Virgina the eve of the game.
Mikey and Lyssa were thrilled.  We picked up slurpee's on the way (a Sumko road trip must).   We had a beautiful peaceful drive UNTIL it got dark, and our GPS had us in the MIDDLE of NO WHERE.  My bed and breakfast seemed like a quest for a haunted mansion in the middle of no where.

It is still amazing to me after ten years of living east and in the country, how you can literally feel like you are lost from society on back roads of Pennsylvania, New York, and Virginia.  I am use to big old FREEWAYS in the West.   I15 as the preferred way to travel.

Although back roads and highways in the East are picturesque, when your GPS takes you to the middle of no where at ten o clock in the evening...scary thoughts and images of big foot come to mind.  Especially when you travel with my husband.  He loves to tease, and he loves to scare.

With that being said, every time he starts teasing with the scary stories, the kids end up crying, and Mike ends up getting scared himself.  This trip was no exception.  Mike and the kids then blamed me for finding crazy accommodations in the middle of the woods.  I assured them back roads and scary stories was just part of "the adventure", but by the time we arrived close to midnight we were all  bit traumatized and hesitant.

We stayed at the Inn at the Crossroads.  It was supposedly built by Thomas Jefferson's nephew and has housed Presidents.  Well as you can see below.... 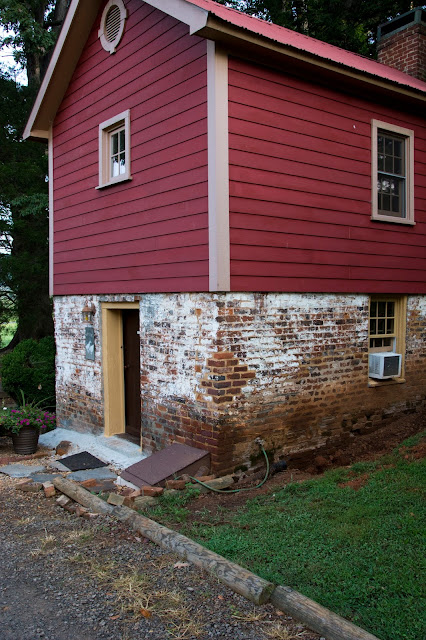 our little cabin was probably not part of the bed and breakfast that Thomas Jefferson was housed in:)  As we entered our little cabin, it was explained that we were staying in the slave quarters...huh....that explained the price and availability.:)

I was in trouble.  As much as I like to admit I hardly get the "most" scared in the family, I was a little bit creeped out.  With no TV, Internet, or a pool it made for a bit of an adventure.  One my family will not let me forget.  I woke up to this from my little back porch ...... 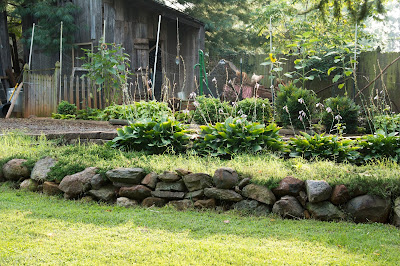 and suddenly I was HAPPY with a smile from ear to ear!
It was a charming little place despite the quirkiness of it all.
I really did end up LOVING it and would totally recommend it to all. 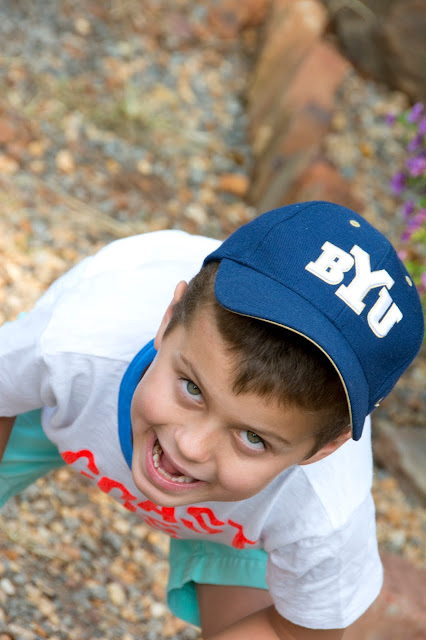 After we left the bed and breakfast we headed into town with BYU paraphernalia and all. 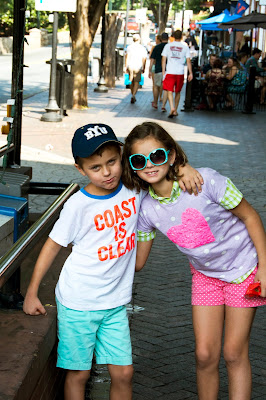 We were tourists for the  morning.
Words that come to mind to describe this little Charlottesville....charming, hip, preppy, collegiate, educated, cozy.
As we explored the streets I kept thinking....

LIFE IS GOOD in CHARLOTTESVILLE, VIRGINIA! 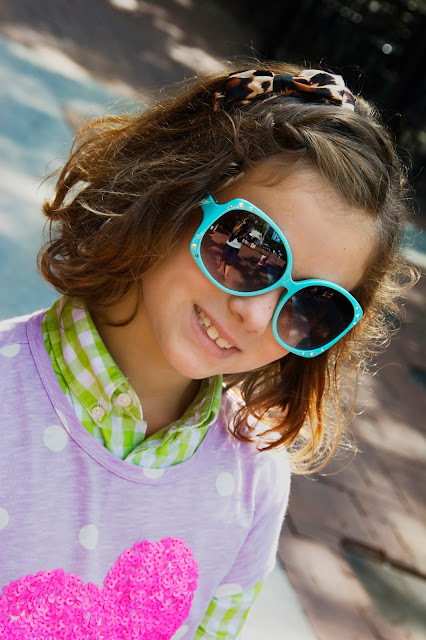 Alyssa in her TURQUOISE glasses as we strolled the streets..... 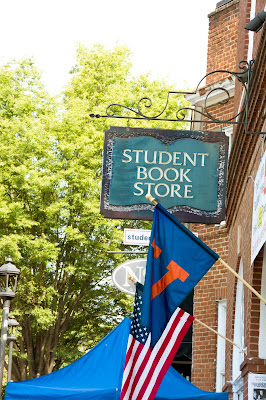 It would be a college campus tour without a picture of the Student Book Store. 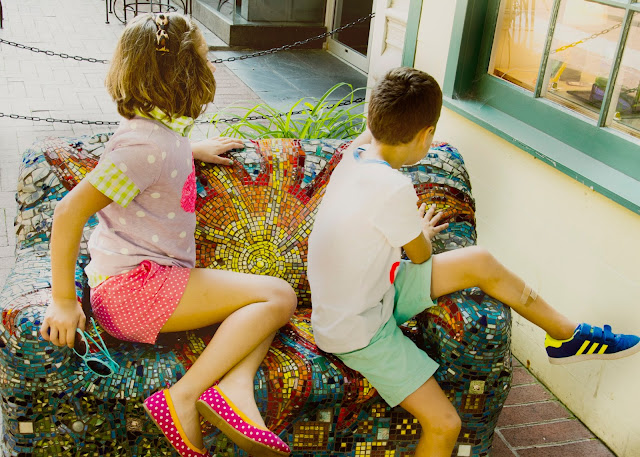 It had a lot of fun upscale boutiques, and some really cool galleries, and yuppy restaurants. 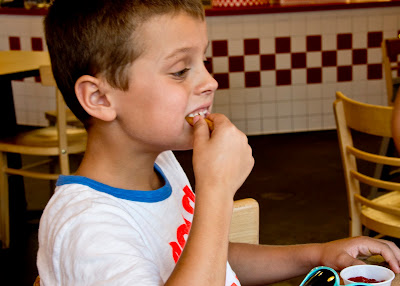 We opted for Five GUYS.  I was outnumbered on the vegetarian cafe. 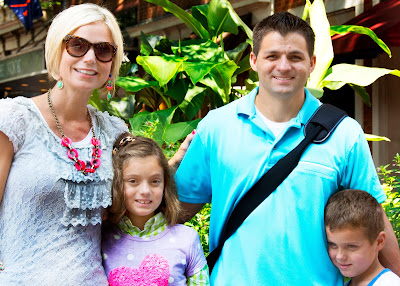 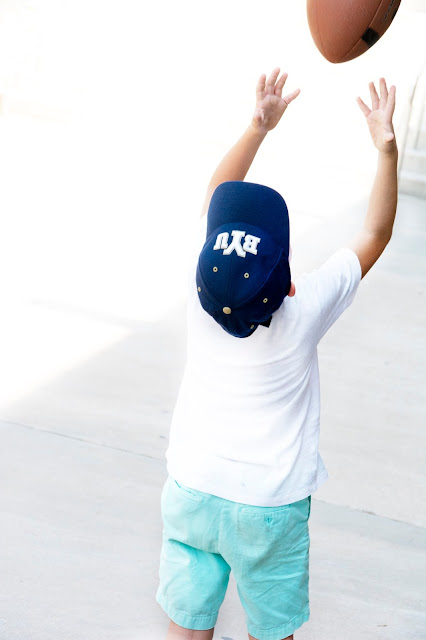 Of course Mikey wore his hat and carried his football all day.  Mike wouldn't have it any other way. 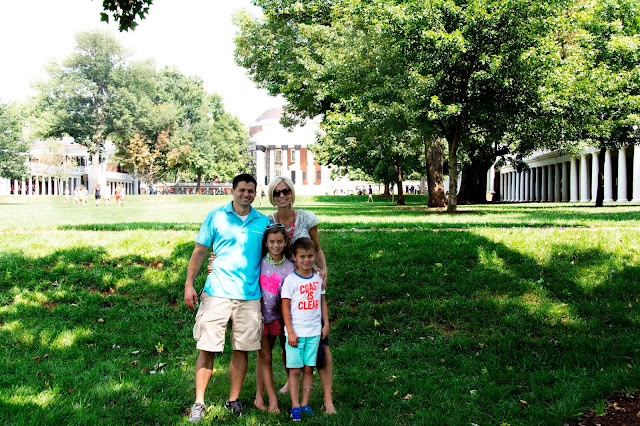 We took a tour of the college campus, and the picture above is in the main courtyard with the Rotunda that Thomas Jefferson himself designed. 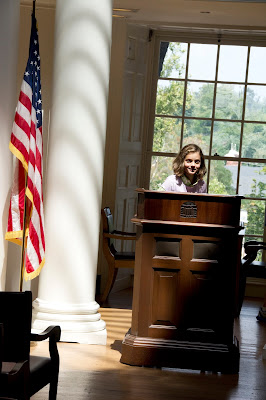 Alyssa acting as the President.....fitting for those that know her.:) 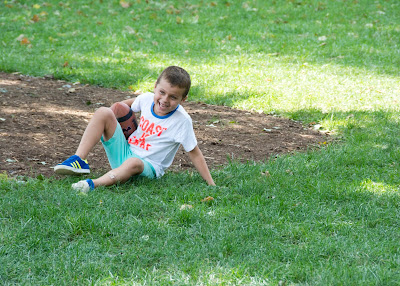 Mikey and Mike practicing some moves int he courtyard.
All the students from Virginia were gathering in the courtyard as well.  All of the girls were dressed up, and I was confused.  I asked a few girls passing by why and they replied..."That is how we do it here.  Girls in pearls, and guys in ties for football games."  A Southern tradition!  Well I love the South, and I LOVE tradition....so the combination was fun to witness.  I was just jealous I didn't get the memo.:) 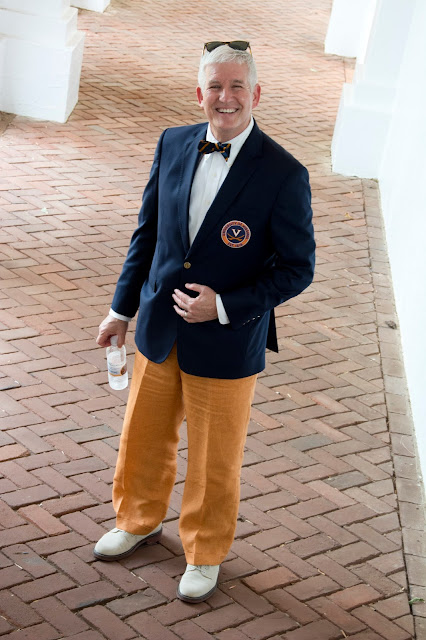 I thought this mans outfit was super spiffy.  After a friendly exchange I found out he is the Dean of Students.  I really just had to get a picture. 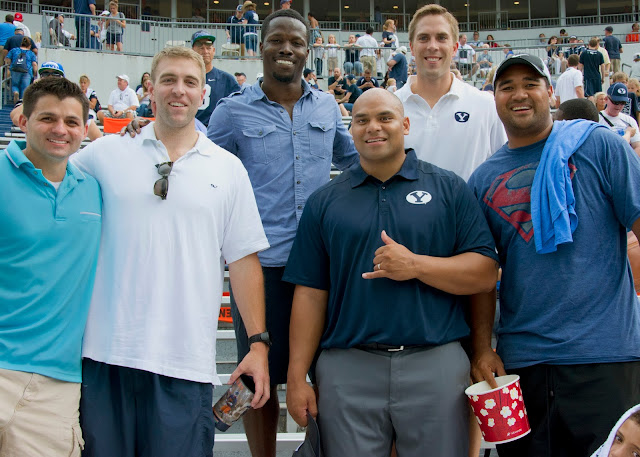 Mike and I ran into quite a number of people that we haven't seen in over a decade.  These were a handful of guys Mike played football with back in the day at BYU.  They had all traveled pretty far for the game.  It was a reunion of sorts.  I got to see friends that I knew from living in DC back in my single days.

We really had a GREAT time!